All About Computer Viruses and Antiviruses

Every day new computer viruses are created to annoy us and to wreak havoc on our computer systems. Below are ten viruses currently cited as being the most prevalent in terms of being seen the most or in their ability to potentially cause damage.
New viruses are created daily. This is by no means an all-inclusive list. The best thing you can do is to remain vigilant, keep your anti-virus software updated, and stay aware of the current computer virus threats. 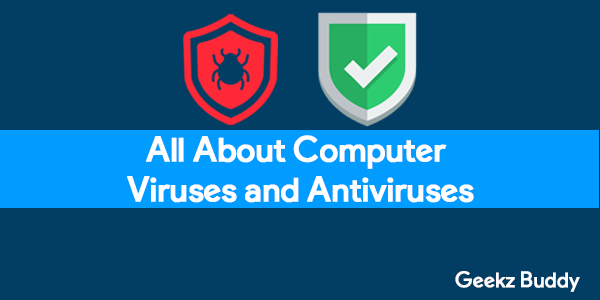 Virus: Trojan.Lodear A Trojan horse that attempts to download remote files. It will inject a .dll file into the EXPLORER.EXE process causing system instability.

Virus: Backdoor.Zagaban  A Trojan horse that allows the compromised computer to be used as a covert proxy and which may degrade network performance.

Virus: W32/Netsky-P A mass-mailing worm which spreads by emailing itself to addresses produced from files on the local drives.

Virus: W32/Mytob-GH A mass-mailing worm and IRC backdoor Trojan for the Windows platform. Messages sent by this worm will have the subject chosen randomly from a list including titles such as Notice of account limitation, Email Account Suspension, Security measures, Members Support, Important Notification.

Virus: W32/Mytob-EX A mass-mailing worm and IRC backdoor Trojan similar in nature to W32-Mytob-GH. W32/Mytob-EX runs continuously in the background, providing a backdoor server which allows a remote intruder to gain access and control over the computer via IRC channels. This virus spreads by sending itself to email attachments harvested from your email addresses.

Virus: W32/Mytob-AS, Mytob-BE, Mytob-C, and Mytob-ER
This family of worm variations possesses similar characteristics in terms of what they can do. They are mass-mailing worms with backdoor functionality that can be controlled through the Internet Relay Chat (IRC) network. Additionally, they can spread through email and through various operating system vulnerabilities such as the LSASS (MS04-011).

Virus: Zafi-D A mass mailing worm and a peer-to-peer worm which copies itself to the Windows system folder with the filename Norton Update.exe. It can then create a number of files in the Windows system folder with filenames consisting of 8 random characters and a DLL extension. W32/Zafi-D copies itself to folders with names containing share, upload, or music as ICQ 2005a new!.exe or winamp 5.7 new!.exe. W32/Zafi-D will also display a fake error message box with the caption "CRC: 04F6Bh" and the text "Error in packed file!".

Virus: W32/Netsky-D A mass-mailing worm with IRC backdoor functionality which can also infect computers vulnerable to the LSASS (MS04-011) exploit.

Virus: W32/Zafi-B  A peer-to-peer (P2P) and email worm that will copy itself to the Windows system folder as a randomly named EXE file. This worm will test for the presence of an Internet connection by attempting to connect to www.google.com or www.microsoft.com. A bilingual, worm with an attached Hungarian political text message box which translates to “We demand that the government accommodates the homeless, tightens up the penal code and VOTES FOR THE DEATH PENALTY to cut down the increasing crime, Pécs (SNAF Team)”

We have all heard the term Trojan Horse, but what exactly is it? A Trojan Horse is a destructive program that masquerades as a harmless application. Unlike viruses, Trojan Horses do not replicate themselves, but they can be just as destructive. One of the most dangerous examples of a Trojan is a program that promises to rid your computer of viruses but instead introduces viruses into your computer.

The Trojan can be tricky. Who hasn’t been online and had an advertisement pop up claiming to be able to rid your computer of some nasty virus? Or, even more frightening, you receive an email that claims to be alerting you to a new virus that can threaten your computer. The sender promises to quickly eradicate, or protect, your computer from viruses if you simply download their “free”, attached software into your computer. You may be skeptical but the software looks legitimate and the company sounds reputable. You proceed to take them up on their offer and download the software. In doing so, you have just potentially exposed yourself to a massive headache and your computer to a laundry list of ailments.
When a Trojan is activated, numerous things can happen. Some Trojans are more annoying than malicious. Some of the less annoying Trojans may choose to change your desktop settings or add silly desktop icons. The more serious Trojans can erase or overwrite data on your computer, corrupt files, spread other malware such as viruses, spy on the user of a computer and secretly report data like browsing habits to other people, log keystrokes to steal information such as passwords and credit card numbers, phish for bank account details (which can be used for criminal activities), and even install a backdoor into your computer system so that they can come and go as they please.
To increase your odds of not encountering a Trojan, follow these guidelines:

1. Remain diligent: Trojans can infect your computer through rogue websites, instant messaging, and emails with attachments. Do not download anything into your computer unless you are 100 percent sure of its sender or source.

3. Install reliable anti-virus software. It is also important that you download any updates frequently to catch all new Trojan Horses, viruses, and worms. Be sure that the anti-virus program that you choose can also scan e-mails and files downloaded through the Internet.

4. Consider installing a firewall: A firewall is a system that prevents unauthorized use and access to your computer. A firewall is not going to eliminate your computer virus problems, but when used in conjunction with regular operating system updates and reliable anti-virus software, it can provide additional security and protection for your computer.

Nothing can guarantee the security of your computer 100 percent. However, you can continue to improve your computer's security and decrease the possibility of infection by consistently following these guidelines.

Who are the Players in the Anti-virus Industry?

Everyone has heard of the leading anti-virus vendors Symantec, Mcafee, Webroot, Computer Associates, and Trend Micro. These companies have a market-leading presence in the United States.

Microsoft, as well, has plans to become a key player in this market. Microsoft acquired intellectual property and technology from GeCad software, a company based in Bucharest, Romania. They also acquired Pelican Software, which had behavior-based security as well as Giant Company Software for spyware and Sybari Software, which manages virus, spam, and phishing filtering.

A lot of discussions have centered on whether Microsoft with come to own a dominant position in the anti-virus market by simply bundling its technologies with its operating systems at no charge. This is a similar technique applied in other markets such as word processing and Internet browsers.
Of course, there are a number of anti-virus vendors who also play in this market. There are many companies with great market presence in other countries that are beginning to become more widely known. These vendors include Grisoft out of the Czech Republic, Sophos in the United Kingdom, Panda Software out of Spain, Kaspersky in Russia, Softwin in Romania, F-Secure in Finland, Norman in Norway, Arcabit in Poland, VirusBuster out of Hungary, and AhnLab in South Korea.

It is not clear where the industry is heading and everyone in this market faces a rapidly changing landscape. The amount of effort to find and provide fixes for viruses is staggering. Malicious programs are getting more complex and the number of them is increasing. Many companies may find themselves without the resources to match the efforts of those truly bent on creating havoc.
Some virus companies are getting hundreds of new samples a day! Moreover, the new viruses are getting "smarter" in that they propagate themselves quickly and they often hide themselves and are smart enough to move around in a system by renaming themselves in an effort to make it hard to remove them.

Protection You Can Afford

All in all, there are numerous ways you can lose the information on your computer. Your child decides to play Chopin on your keyboard, a power surge, lightning, a virus, or even simple equipment failure. Therefore, backing up the contents of your hard drive is an absolute MUST. By regularly making backup copies of your files and storing them in a separate location, you can typically get some, if not all, of your information back in the event your computer crashes.
While a regular backup to a floppy, CD, or zip drive will save your files, wouldn’t it be great if you could create an exact copy (a drive image) of your hard disk? That means backups of all your files, programs, and user settings. This would definitely save you time when it came to reloading. Acronis may be able to help.

Acronis True Image 9.0 is a robust disk-imaging utility software that copies the entire contents of your hard drive including data and operating system files, personalized settings, and more, onto another disk or disk partition. Its layout is easy to use and navigate. It also includes wizards that can walk you through both backings up and restoring your computer. Highlighted features include:
Secure Zone — allows you to save data to a special hidden partition located on your hard drive which would eliminate the need to purchase an extra hard drive.
PC Cloning — you can upgrade to a new system disk without needing to reinstall the operating system and applications or configure user settings.

Acronis Snap Restore – lightening-speed restore of your PC from an image. You can start working in seconds while your system is still being restored. Acronis provides a free test-drive of its product and a 30-day money-back guarantee. When you are ready to purchase, you can either download for $49.99 or if you so desire, order a boxed version for $59.99. With Acronis True Image Home 9.0, you can rest easy that your family pictures, personal documents, tax returns, resumes, and other important information will not be lost forever.

I hope this article helps you to understand Computer Viruses and Antiviruses. If you have any questions regarding this then please write in the comment section below. Also, share it with your friends and family and follow us on Social Media to get all the latest updates.